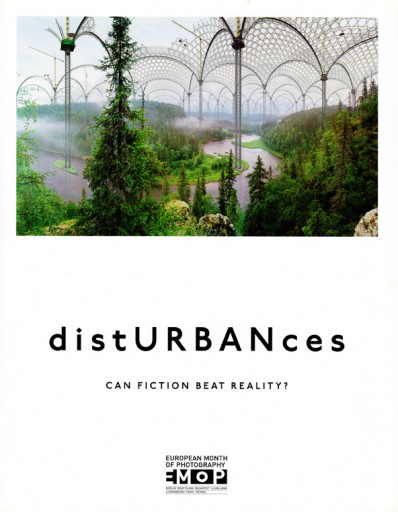 Today, economic, ecological and political crises push the world towards societal changes. In this era of globalisation, characterised by the unprecedented dominance of the visual experience, one may at one and the same time witness not only ever increasing complexity, but also the incessant interweaving of worlds that are physically perceptible from close up yet remote and digital at the same time.

The time-space ratio in contemporary society determines our physical reality as much as it is itself subject to increasing, paradoxical change. Physical time is measured in ever-smaller units according to an internationally recognised system. Originally defined by the Earth’s rotation, since 1967 the second has been calculated on the basis of atomic measurements; today it is possible to measure one billionth of a billionth of a second.

Catalog can be found here.

Technological inventions from the nineteenth century onwards allow places that are geographically thousands of miles apart to be connected in increasingly smaller units of time, and permit the linking and transfer of local experiences around the entire globe.
Under the slogan ‘Security through Diversity’, the high-security fiberglass cable company Hibernia Atlantic connects global financial markets and banking systems. Art critic, activist and professor of philosophy Brian Holmes remarks on the absurdity of this notion, stating that: ‘High frequency trading marks the rise of machines. As it moves toward nanoseconds, an asymptotic point appears: the speed of light. Imagine a flash-crash that lasts forever; a blinding eternity. By automating human beings out of the picture, interactivity is finally poised to grasp its elusive object.’

Digital technologies, economics-driven globalisation and political upheavals all accelerate our present. At the same time, they radically influence human lifestyles, migratory movements and transnational power relations. Despite our rising efficacy at surmounting distance and time, the world is fragmenting.

To the extent that both acceleration and constant changes in digital communication engender mankind’s alienation from material and physical perception, the permanent use of laptops, tablets and smart phones not only allows participation in the unlimited flow of knowledge, but also leads to the incapacitation of the user; the individual is thrown back upon the power of his/her own, sometimes merely apparent, reflective decision-making authority. Real-time and access to social platforms such as Facebook, Twitter and YouTube, available to some parts of the world’s population via the Internet (1.8 billion people in 2011), are not only used for private and commercial purposes but have also become the new media of political activism. Individuals, now able to form groups, deploy these new constellations to take a globally visible stand on socio-political upheavals and/or traditional power structures (i.e. Tunisia, Egypt and occupy movements). The use of images, be it journalistic photos, Internet archives or indeed the artistic exploration of recent political events, such as in Tahrir Square, Cairo or the current situation in Syria, has an actual and real impact on the political upheavals of today.

In view of these phenomena, the production and distribution of pictures, as well as the artistic development of future models – along with their imaging methods – play an important role. How will the emerging forms of political, social and cultural realities relate to artistic designs and models that range from dealing with ‘reality’ to utopian and dystopian visions?

The distURBANces project, cooperatively initiated by the partner cities Bratislava, Budapest, Ljubljana, Luxembourg, Paris and Vienna, presents artistic positions that offer new perspectives on urban, technological and political developments. Initiated as a kind of tribute to the American science fiction writer Philip K. Dick, whose novels situate the theme of simulacra (Jean Baudrillard) into artificial environments and artefacts, distURBANces was developed to question today’s urban-and landscape representation paradigm by focusing on the distortion and the perversion of reality in our globalised world. The exhibition shows how artists focus on, analyse and envision current developments, exploring questions such as: how does artistic photography today depict the acceleration of time in relation to space? What impact do the aforementioned changes have on people and their real habitat? How are the changes in human relationships to nature and the city reflected? Which utopias or dystopias do artists generate from the present situation?

The correlation of the coordinates of time, space and man in accelerated, digitised living environments evokes the invention of new image worlds. At the same time, current socio-political developments in urban areas – from surveillance and closed-circuit television to political upheavals – all play a role in the production of the artistic image. Visions and fictions are overtaken by reality. At the same time, certain representations take place on the virtual plane only. In digital image realms (i.e. cyberspace(s) and computer games), worlds are created in which human life appears merely as an increasingly complex simulation. In many instances of digital imagery, fiction can hardly be distinguished from reality. Time seems to stop; the present and future become one.

The project, which focuses on different curatorial aspects in every city, presents a total of twenty-six international artists who follow different thematic lines, from an analysis of real life in its socio-political environment, or mankind’s abuse of nature, from utopian and dystopian visions to the development of model worlds. In dealing with real, virtual, staged or simulated worlds, many artists explore the phenomena of artificial and mediated reality within a semantic context of heightened visualisation. With regard to the increasing reliance upon the virtual in everyday life, these artistic practices of mixed reality – in which the fictional world is depicted as indistinguishable from the real, and the real one as close to surreal – tend to dissolve the membrane between the real and the virtual.