Looking for the Clouds: Contemporary Photography in Times of Conflict 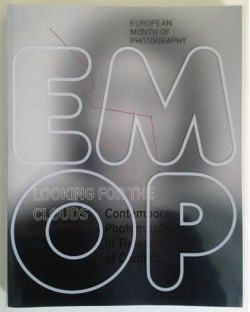 This catalogue was published in 2016 and deals with photography after the 9/11 events. Artists in this publication deal with the surveillance scandals (NSA), the identity crisis in Europe and the rise of nationalism, modern warfare in relation to the Middle-East and above all the refugee crisis.

“Looking for the Clouds” is hinting at the great expectations refugees and immigrants  might have when reaching for the shores of Europe after the 9/11 aggression developed in a full war in the Middle-East with a lot of consequences worsening the then also existing financial crisis and economic turmoil in some European countries. The refugee crisis brought many countries to the brink of explosion as an after-effect of the wars in the Middle-East.

War on terror also meant more surveillance and control on ordinary citizens. Il also meant new war-strategies of which drones are just an aspect. And watching the clouds can therefore also be an expression of fear.